Maybe the suit jacket intimidated me a little or maybe it was the clear articulation of this young man’s intellect. Across from me sat Jackson Shembekar, Jesuit High School Senior and crypto-currency wiz. His demeanor was professional but soft, and I could tell he really likes to share his knowledge and passion for blockchain. Accompanied by a small shrug and a smile,

“I love learning new things, and I have always been business oriented.”

He went on to describe that even as a young boy, he was fascinated by striking deals and making money.  Enlivened by the memory, he laughs off an anecdote about how another kid from class brought in a Rubik’s cube. Picking up on the class interest, Jackson and a friend found the cube online in China for three dollars, ordered them in bulk and resold them for twenty dollars each like it was second nature. By middle school, the neuro-synapsis must have been firing at an exceptionally high speed and Jackson was regularly thirsty for knowledge.

Knowing he was also a role model for his two younger brothers, Preston and Colin, he began dedicating time in researching things that interested him on the internet. As if this ferocious curiosity wasn’t uniquely telling of his intelligence, he was also taking piano lessons, playing basketball and baseball, and excelling in school. Oh, and did I mention is a strong member of the chess team, and recently got his private pilot’s license? It’s no doubt the support of his supermom, Dr. Anita Jain Shembekar, played a huge role in developing such personal accomplishment and merit. As a self-made real-estate mogul in Florida and single mother of three, it’s clear where Team Shembekar gets their grit and pursuit of excellence.

Fourteen was the real catalyst for Shembekar. Blockchain entered into his periphery and Jackson was hooked. When he first found out about crypto, he would continuously listen to videos and podcasts just to keep his learning sharp. He began to introduce his brothers and mother into the uncertain territories of bitcoin, Ethereum, blocks, nodes, mining, and more. No doubt the self-motivation for discovery, risk, and reward was strong. Strong enough to convince his two younger siblings to eventually go all in with their childhood savings and see what turned out. While he blushes just a smidge at his “mistakes” along the way, he tells me that he and his brothers are sitting on a half million-dollar portfolio, only three years later at age seventeen.

He’s astute to provide a disclaimer of this financial attainment and demonstrates a real sense of self-awareness to note that he had and still has some luxury of being so high risk-high reward because he’s still in the first chapter of his life. Even still, he knows what it takes to be successful and makes this unduly clear for me. As I compliment how well-rounded he is, he replies,

“The most important thing is starting, and the next thing is consistency. Being well-rounded is good but you don’t need to be well-rounded. There’s something powerful about being really good at something and staying consistent with it.”

One thing I know to be true is that consistency is one trait that makes people believe in you. According to Jackson, when it comes to the future of digital currency, and really anything in the internet space, the real question is whether people believe in it. Do they trust it? He explains that Bitcoin has the “first on the market” share of the people’s trust but that players like Ethereum really built on the blockchain platform for other purposes such as decentralized applications and smart contracts. Yet others like Tether, take a different approach and actually back their coin by the US dollar. Another major difference is “how the ledger is managed,” he kindly explains to me. My crypto-curiosity is piqued as he describes the various mathematical and scientific ways to create fraud-proof, CEO-free, decentralized transactions using either proof of work or proof of stake. Cardano is using the latter, and Jackson is also a clear advocate for proof of stake. What unites them all is that each piece of code can be traced back to the beginning to monitor integrity transparently, universally, and simultaneously eliminate the need for any third parties.

Any relative beginner in this space, and also many developers and investors can see just how much of an expert Jackson is. He was recently invited to be a recurring guest on a local Tampa Radio Show as well as has several news sources interviewing him with the latest being ABC Action News.

What I am sure of is that it’s just the beginning for this multi-talented young man. With less than one percent of the general population engaged on the blockchain, his foresight is an incredible gift to the world, and he is a front-runner in the space. Part of his current interests are to keep track of what buy-ins are legitimate and have promise versus the “pump and dumps” that enter the bull market. The way he sees it, we’re still in the innovator stage. Developers, retail investors, and institutions are pouring into the space at a rapidly increasing pace. He even goes on to say that numerous maximalists have thrown in 80% or more of their portfolios. For the average Jane Doe out there, it’s pretty easy to buy-in and cash-out, Shembekar explains. When I inquire about equity and fairness in the arena, he reveals that unlike traditional investments, it levels the playing field with any socioeconomic disadvantages being eradicated. Plus, bitcoin operates to the hundred millionth – making it relatively accessible for all…

…Or all who have the internet I suppose. Jackson is aware of the challenges and backlash that his industry is receiving – primarily the electricity and energetic consumption of miners, who hold large graphics cards that ensure the transactions on the open-sourced ledger. The blockchain is said to expend an enormous amount of energy consumption – approximately the size of Argentina. Nonetheless bitcoin and the like are at least considering the renewable options. Notably, I learned that bitcoin actually takes less of an environmental impact than gold mining (Wintermeyer, Forbes, 2021).

The real energy though is in Jackson’s mental game. To alleviate stress, he likes to hit the gym and train physically. Playing baseball since age nine has barely taken a backseat to crypto-investing. He is slated to pitch for the University of Tampa this coming Fall in 2021. In order to manage all of these obligations Jackson says it requires that he have accountability, honesty, responsibility, and reliability. He’s proud to bring these traits (as well as the accompanying mental preparation) to both the mound and the trading floor.

What’s next for Jackson Shembekar? Well, he has also been getting into real estate and has recently flipped a 54K house to a 225K sale in less than 90 days. He’s got his eye on the future of NFTs believing that while there is a bubble currently, the concept is comparable in many ways to the dotcom boom and will be around for the long run. He laughs and says there might be a future for bitcoin in gambling! His bet is on blockchain and real-estate. He articulates several precise use cases for the ledger system in licensing, titles, insurance, and contracts. He believes that this system “is something that can really change the global ecosystem.”

Personally, I feel that someone like Jackson could change the global ecosystem. He concludes, and I couldn’t agree more, “Whenever I see an opportunity, I play to win!” 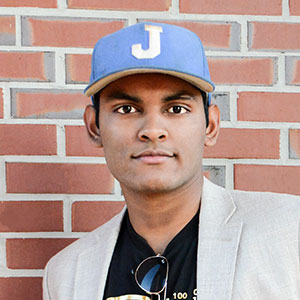 Jackson has spent numerous hours researching and studying up on Bitcoin, Cryptocurrency and the Blockchain. Shembekar has invested in the cryptospace since he was 14 years old.  Now at just 17, he holds positions just shy of ½ a million dollars.  But he says if he himself had not made some mistakes he would be sitting at well above $5,000,000 in cryptocurrency. Jackson has appeared on The Consumer Quarterback Show hosted by Brandon Rimes.  Shembekar will be a continual guest every month as a cryptocurrency expert!

Jackson is a pianist, violinist, President of Chamber Orchestra, President of SADD, President of the Chess Club and is a recipient of the St. Ignatius Gold Medal Award and was the MVP of the Week at the Steinbrenner Classic in 2020. Shembekar at 17 is already a private pilot and is baseball pitcher headed to the University of Tampa to play baseball.

He has 2 brothers and is the son of Dr. Anita Jain Shembekar, real estate investor/mogul in Tampa Bay.