I’m already captivated. As I listen to a handsome man with an unwavering sense of purpose to the divine art that is living inside him, I close my eyes and try to imagine the story of his book “The Essential Revolution” on a big screen in a movie theatre. As he is describing to me, I realize that It’s been a while since I’ve been to a movie theatre – partially because of COVID and partially because I’ve immersed myself as the creator of the stories. So, when author Mike McGinnis describes his artistic and creative writing process to me, I just smile because it all makes so much sense. I can actually feel the magnetism that pulls Marcus (an African American police officer who serves as our narrator) into Dimitri’s world, for better or worse. Dimitri, the main character Mike tells me, is a mixed-race, mute young man who grew up in a vile area of town. Dimitri, after suffering massive trauma and years of abuse at the hands of his stepfather, ultimately ends up shooting him in their final conflict. Later in the hospital, after being shot himself, he returns from a near death experience as a prophetic messenger.  who is completely awakened existing through the eyes of Marcus (the man who shot him) as an irresistible fascination with the experience of Christ-Consciousness. Through Marcus’ point of view, we as the readers, he explains, get to travel through the layers and deep teachings this book offers. There is no escape as Marcus unravels his own humanity, as we unravel with him. Dimitri is there to mirror it for us all, through prison drama, violence, and even a little romance.

The title of the book alone, “The Essential Revolution”, speaks volumes about the depth of the lessons it contains. Set mostly in a men’s prison, we follow the psyche of a few men struggling with their emotions, relationship to each other, and the world. A female oracle periodically presents nuanced and grounded wisdom that these men’s stories, that this collective story of our lives, is about facing the Truth with a capital T. Every moment is like looking in the mirror at our shadows, demons, and angelic purity alike.

“The book just won’t let you off the hook,” states Mike matter of factly.

According to an intimate group of McGinnis’s friends – folks he lovingly calls “beta readers” – the story captured in even just the first three chapters made it “a book for the world.” This came as a surprise to Mike who knew their comments were authentic because he shared his early-stage writing process on a whim at a friendly gathering. Frustrated by the ghostwriting firm he had hired; Mike had sat down to write the first three chapters out of impatience. After that, the words spilled out of him. He admits though, that the whole story of this book came to him at once, all laid out. In his words,

Mike’s own revelation for “The Essential Revolution,” first came to him about four years ago while he was alone and wandering through the forest in Costa Rica And his characters experience similar, unavoidable, divinely guided revelations. The characters do this because they have too. In order to make any progress forward not just in the early release prison program but in the dynamic relationships they have with themselves and each other, they simply must eventually realize that there are no victims, no matter the traumas, burdens, and circumstances of our lives. For these men, the real revelation comes upon actually dropping into their feelings and letting it be ok that the emotions are there.

By the end, as readers, we find ourselves returning to our true human nature of love and compassion. The story pulls people in, thus opening the opportunity (in a sneaky way) for our individual awakening whether we want that or not. The process, the engagement with every page, is guiding us to the ultimate importance of releasing the stored emotional energy in all of us.

Calling in from CR, where he’s lived for 30 years, Mike has no problem that I’m a little emotionally frazzled from running a little late. He laughs and tells me that there, “everyone is on Tico-Time,” meaning they are always late. He can’t stand making plans, he adds. Marketing the book has him adhering to slightly more of a routine but he tightens up a bit as he sighs and tells me, “I’m adapting but it’s not easy. I really like to have my freedom.” Part of the Christ-consciousness that his main character Dimitri exhibits is this right of passage to emotional freedom. Dimitri is really a guy who came to us to change the world through his modeling and resilience. The lesson is that truly, every single thing that’s happening to us is happening for us. We have to trust in the process and in our own purity to even come close to attaining this freedom. Juxtaposed in a prison setting, the prison in our minds becomes crystal clear.

Mike has been to jail, he admits. He’s actually a high school dropout. Telling me this actually brings a smile to his face because he’s so assuredly confident that his gifts and talents are exactly where they need to be even if it hasn’t all been revealed yet. “I’m so into doing my own work, it’s ridiculous,” he raises his eyebrows and smiles to himself again. Mike subscribes to Neal Donald Walsh’s concept of constantly observing every thought, every word, every action, and questioning where it is coming from. “This is the work that one will do for the rest of their lives once they truly step onto the path,” he states firmly to close up our foray into the spiritual journey toward enlightenment that resonates in our daily lives and in the stories we tell.

For many of us, the movie of our lives is constantly going in our heads. Then there are the gifted ones like McGinnis, who actually have an expanded connection to source energy and see other characters and their struggles and triumphs playing out equally as plain as day. The existing testimonials on The Essential Revolution say it all. They inspired Mike to write two more sequels to create a trilogy for this movement and paradigm shift. An audiobook will follow more immediately in the Summer of 2021 and a workbook will round out the core of the revolution.

To close our interview, Mike reminds me that “If you’re carrying baggage, you won’t be able to soar spiritually.” 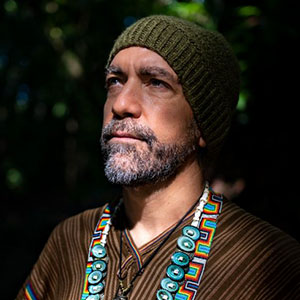 Michael S. McGinnis, Jr., author of The Essential Revolution series and recipient of the Literary Titan Gold Book Award, has dedicated his life to the awakening of humanity on a global level. Through extensive self-study and first-hand experience, Mike has been gifted to serve as a channel for the words the world needs to hear at the most crucial moment in history. In his early twenties, after his first transformational experience wherein he discovered his pre-conceived limitations were formed through his own words of victimhood, this law-breaking high-school-dropout turned his life around and moved to Central America. He went on to succeed as an entrepreneur, big wave surfer, and champion race car driver while moonlighting as the unofficial sheriff of the small town he helped develop.

Still haunted by an unfulfilled void, Mike fell into a suicidal depression, leading him to his second transformative revelation that there was nothing that could make him happy and the fulfillment he was seeking was within. After two more profound awakenings, he fully surrendered to living in service and helping those who are ready to come to the same self-realization.

Currently, Mike is collaborating on a reforestation-backed crypto coin and the building of a conscious community, while readying himself to transmit book two of the series. He enjoys being in nature and loves animals as well as all life on earth.

“When you recreate another through your perception of them you recreate not only yourself, but all people of the world.”